A Great Day at the Races! 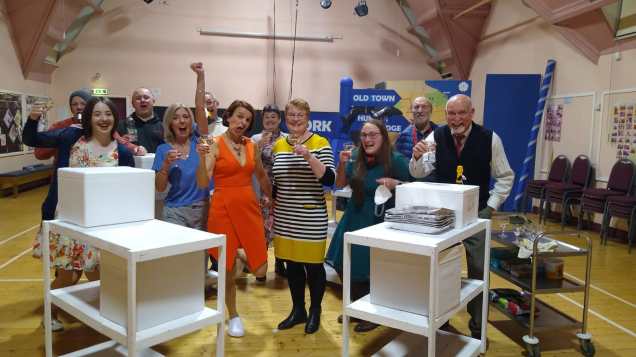 Cast and crew celebrating after the final night of Ladies Day!

Back on the rails in more ways than one! That’s the Morpeth St. George’s Community players who tread the boards last week when they tackled Amanda Whittington’s comedy ‘Lady’s Day.’

The play was originally scheduled to have taken place in 2020 but was put on hold due to the coronavirus pandemic. However after being out of action for over two years, the players jumped over many hurdles and not only delighted the audience on opening night but also captivated them with a stunning performance.

The bulk of the action takes place at York racecourse when Royal Ascot was held in the city in 2005 – and the players ensured that it was a success from the start to the finishing line!

The play was also a triumph for Grace Winpenny who was making her bow as director/producer with David Kiely as her assistant.

The contrasting personalities of the four female characters shone through with distinction whilst the three gentlemen made sure that the high standards remained throughout.

Janet Robinson led the way with a vibrant performance as Shelley and was ably supported by Sharon Saint Lamont as Pearl, Bridget Rowbottom as Jan and newcomer Elizabeth Blanchard as Tony Christie fan Linda.

Graeme Trotter was eloquent in the role of TV commentator Jim, Chris Davies should be delighted with his debut coupling up the parts of Fred, Kevin and Patrick whilst Alan Bullock who took on a duel role as Joe and Barry, was involved in a poignant scene as the latter character with Pearl in the second half.

Robin Herron was stage manager, Austin Davey was responsible for lighting and sound, Margaret Johnson as scenic artist and Joann Evans as prompt.